Berg Katse is the main antagonist of Gatchaman Crowds. A mysterious androgynous alien who causes chaos through his shapeshifting abilities and has brought about the destruction of several planets.

Berg is a tall, thin pale skinned humanoid with razor sharp teeth, a prehensile tail and long purple hair that covers his red eyes. He wears a blue suit and pants with black high heel shoes.

Berg Katse has the ability to shapeshift through direct physical contact with a person (usually by kissing) and an extendable prehensile tail that he uses as a whip. He can also teleport and manipulate machines remotely. Due to having possession of a NOTE, he can enhance his abilities by activating it. This allows him to extend his tail infinitely to bind, lash or impale his enemies and grants him new powers such as invisibility. His Gatchaman form is presumably so powerful, Paiman states that it could potentially defeat the G-Crew. 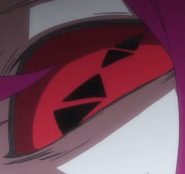 Retrieved from "https://gatchaman.fandom.com/wiki/Berg_Katze_(Crowds)?oldid=4862"
Community content is available under CC-BY-SA unless otherwise noted.