G-4 also called Helico-Buggy is an amphibious armored buggy piloted by Jinpei the Swallow. It is usually disguised as a regular buggy and is housed in the right of the God Phoenix and is the only vehicle that can be used on land, sea, or air.

Its name was changed to "Star Buggy" in "Battle of the Planets".

G-4 is capable of travel on land but can also sprout helicopter blades and jet thrusters for flight. It is also capable of being driven underwater where it covers the pilot area with durable glass that prevents water from coming in.The mouth-like front contains a vast amount of equipment such as rotating saws and a drill, it also serves as the entrance of the vehicle. In episode 68 it is later outfitted with a bomb that can be launched at foes.

In the 1994 OVA, a redesigend G-4 is briefly seen in the first episode. In civilian mode, it is a magenta and white dune buggy that transforms upon activation of the G-Bracelet into an armored vehicle equipped with rockets for flight. 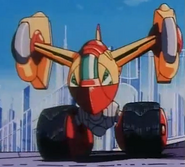 Front view of the G-4 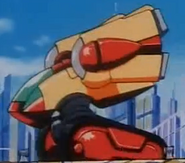 Side view of the G-4
Add a photo to this gallery
Retrieved from "https://gatchaman.fandom.com/wiki/G-4?oldid=5362"
Community content is available under CC-BY-SA unless otherwise noted.