The Gatchaspartan (ガッチャスパルタン, gatchasuparutan) is a high speed aircraft that serves as the main mecha of the Science Ninja Team after the destruction of the New God Phoenix in Gatchaman Fighter.

Unlike its predecessors, which were vehicles independent of the main mechs, the Gatchaspartan is a fusion of the team's 5 mechs and must have all of the team members in order to form the ship.

Spartan Laser: A powerful multi-directional beam weapon on the tip of the nose cone. It is also referred to as the Bird Laser Beam in certain episodes.

Space Equipment:The Gatchaspartan has equipment used for space travel. The first being a set of booster rockets that launch it from a ramp. The second is a special rocket platform which gives the Gatchaspartan enhanced speed and maneuverability as well as a disposable rocket launcher which fires 3 high explosive missiles. The ship can be also be fitted into any 3 stage rocket for emergency travel.

The Gatchaspartan blasts off for space on a special ramp. 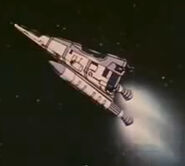 ..and detach from the ship once the fuel is expended.

The Gatchaspartan with its space missile launcher and rocket platform attached.
Add a photo to this gallery

Hypershoot: A maneuver where the ship charges Delta Power into the Gatcha One vehicle and launches it towards the enemy mech with Ken riding on top of it, wielding the Gatchaman Fencer sword. Ken then uses the Gatchaman Fencer to cleave the giant enemy mech, then ram into it with the Gatchaspartan and slice it from the inside. One of the drawbacks of this weapon in all its forms is that the Delta Energy radiation it emits from the Gatchaman Fencer is slowly killing Ken from exposure. The energy this attack produces is equivalent to 2,000,000 kW of electricity.

Ultra Hypershoot
Add a photo to this gallery

Retrieved from "https://gatchaman.fandom.com/wiki/Gatchaspartan?oldid=8617"
Community content is available under CC-BY-SA unless otherwise noted.