Infini-T Force is a crossover project that celebrates the 55th anniversary of Tasunoko. This anime featured the main four superheroes from Tatsunoko Productions: Gatchaman (G-1), Casshan, Hurricane Polymar and Uchuu no Kishi Tekkaman.

It was directed by Kiyotaka Suzuki at Digital Frontier and Toshiya Ono who previously worked on Gatchaman Crowds. Keiichi Satou is in charge of the original hero design concepts, and Koji Nakakita was in charge of suit and mechanical designs.

The Infini-T force anime will have a different story from the earlier manga [ Infini-T force: ~ Mirai no Byousen~] by Ukyou Kodachi and Tatsuma Ejiri.

The story of the original manga begins when a girl named Emi uses a pencil that can grant any wish. Emi gets caught up in the robbery of a convenience store, and her life is in danger. She uses the pencil to wish for a "hero that will save everyone." Four heroes appear in response to Emi's wish to change the course of the future.

the character design of Gatchaman (G-1) and Ken washio

the character design of casshan and Azuma Tetsuya

the character design of Tekkaman and joji minami 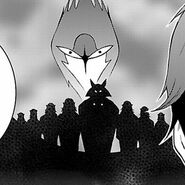 Sosai X, Berg Katse and the Galactor goons seen in a brief cameo in the manga