Jun also known as Jun the Swan, is the team's electronics and demolitions expert. Her Bird Style is based off of the Swan. Her workplace, GoGo Cafe Snack J, serves as the gathering place for the Science Ninja Team which also serves as hers and Jinpei's home.

While Jun never knew her parents, her father was American and her mother was Japanese. Jun grew up in the Shirayuki Orphanage where she met Jinpei, and they eventually came under the wing of Dr. Nambu.

In a possibly-apocryphal article in Fantastic Graphics TV Anime volume 3, it is stated that Jun's parents had died when she was a child and that she was taken in by an aunt, who also died (leaving her to wind up at the orphanage). Its canonicity to the original series is debated, as no one involved with the series seemed to have written the backstory and it was an answer to a fictional "interview" with the team members.

Jun is a young woman with dark green hair and green eyes. In the first series, her hair slightly extends beyond her shoulders, and curls up at the ends. Her hairstyle was slightly modified for both sequel series, to have her hair be straighter, slightly shorter, and be a somewhat brighter shade of green.

Her civilian clothing usually consists of a red-and-navy t-shirt with a pink number "3" insignia, as well as pink-and-white striped bellbottom pants. In the sequel series, her civilian uniform is changed so that she wears a pink crew-neck "3" t-shirt and white capri pants.

Her Bird Style features a pink dress, white elbow length gloves, white over-the-knee go-go boots, and a white cape colored red on the inside. Jun's swan-like helmet features orange highlights and a light orange visor, as well as an antenna in the back.

Jun's design was heavily modified for the OVA remake. While still sixteen years old (as in the original series), Jun is designed to be taller and more physically developed, with a larger bust size. Her hair was also changed to be a short brown bob cut, as opposed to long and green.

Her Bird Style was also modified, with the dress being pink-and-white, with a split skirt. Rather than the "G" belt, she bears a modernized "G" symbol in the middle of the dress.

Rather than a numbered T-shirt, she wears a "3" necklace with her civilian clothing, a pink midriff-baring top and green striped skirt. She is also shown to wear a red and black motorcycling suit in her first appearance.

Jun's uniform in the Imagi film underwent various drafts, although an earlier design appeared to be a cross between her original uniform and the one seen in NTT Gatchaman: She would wear an armored pink-and-black dress, pink-and-black armored thigh-high boots, black gloves, and a black cape.

Another draft seen in other concept images had Jun wearing her OVA uniform, while the later animation tests and revisions of the trailer gave Jun her original outfit back. Her civilian look in storyboard reels seemed to also be undecided, although her hair was to be brown (as seen in a colored animation test).

Jun is a brave and independent young woman who likes to ride her motorcycle in her free time, when she's not busy working at the Snack J. In the battle against Galactor, Jun takes her role very seriously and tries to look out for her team.

Jun knew Jinpei from childhood, having found him as an infant in Mount Jupiter. She took him back to the orphanage she resided at, and raised him as her younger brother. She takes care of Jinpei both on and off the field.

Like most siblings, although they love each other, they often argue and tease.

Jun works with Ken more than the other members of the team. Despite having the same guardian, Jun does not consider Ken her brother. She starts to develop romantic feelings for Ken, often being concerned for him whenever Ken gets himself down. Jinpei teases Jun about this, to which Jun usually tells him off. She gets a little irritated when Ken does not return her affections or show no interest in the relationship, being more dedicated to their mission.

Jun's style of Kagaku Ninpo uses agile movements that tends to include high kicks that expose her humerus and thighs. She often uses explosives and flail weapons. 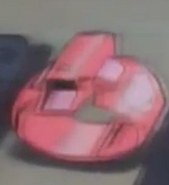 Jun using the Elenettor.
Add a photo to this gallery

Auto Swan: Jun's motorcycle in Gatchaman II. While it lacks the hovercraft function of it's predecessor, the Auto Swan is a fast and powerful motorcycle equipped with twin missile launchers and rocket boosters. It was destroyed along with the New God Phoenix in Gatchaman Fighter.

Gatcha Three: Jun's mecha in Gatchaman Fighter. A green and white jet vehicle with rotary fans inside the wings. Armed with laser cannons and missile launchers. It is one of the five mechas used to form the Gatchaspartan, forming part of the wings and the midsection of the ship.

Appearances in Other Media

Jun first appears in a cameo in episode 2, enjoying takoyaki along with Ken. They are depicted in their original series designs.

She next appears in the hour-long special "Episode 12.5", with the rest of the team, to stop the Doronbo Gang from stealing a ring. However, her face was obscured by her visor.

In the second episode of the Time Bokan OVA, The Dornobo Gang are ordered by their boss to find the Tatsunoko Kingdom and steal a gem from a statue in the center of the city. While preparing for the job, Boyacky remembers about the time six odd characters (The Science Ninja Team and Dr. Nambu) walked into his noodle shop, ordered six egg croquette noodles and left without paying. When he tried to confront them about it, they went down a manhole with the Tatsunoko logo on it and escaped. The Doronbo Gang then deduces that this is where the entrance to the Tasunoko Kingdom must be. The Doronbo then attack the city and all the old Tatsunoko superheroes try to stop them, including the Science Ninja Team. However, most of them go home after the mecha turns into the high school girl mecha Sailor Mun Mun and pleas for them to stop picking on her. Hurricane Polymar states he will stay to fight the mecha. Jun then tells Ken that Ryu, Joe and Jinpei went home because they were bored and upset that they didn't get to say any lines. Ken then states that as a hero of justice, fighting high school girls is not his style. Jun misinterprets this as Ken having a high school girl fetish and that he likes younger women. To which Polimar teases Ken about it. Ken then roundhouse kicks Polimar for his mockery. Ken tries to patch up with Jun, but makes things worse by stating that women blossom after thirty, which Jun is insulted by because she's still in her 20s. Both Polimar and Jun are enraged and proceed to beat Ken up. The Mecha, taking advantage of their bickering, blasts them. Noticing Jun down in the rubble, Boyacky and Tonzura pick her up with the mecha and ogle her as she pleas for help in suggestive poses.

Doronjo, jealous of Jun trying to be sexier than her, rattles Jun by shaking her using Sailor Mun Mun and then tosses her with a baseball-style pitch.

Yatterman-1 and 2 catch her in mid-air and rescue her but then Yatterman-1 accidentally drops her during their usual schtick of announcing their arrival to their archenemies. Jun lands safely on Omotchama's head. After a brief, standard episode style fight, the OVA ends.

When the five were shown in their civilian clothing, Jun and Jinpei were depicted in their clothing from the original series while the other three wore their Gatchaman II/Fighter streetwear.

Jun and the rest of the Science Ninja Team have a brief guest spot in this New Years Eve special that brought together various characters from the Tatsunoko franchises.

Jun is a playable character in the fighting games Tatsunoko Fight and Tatsunoko vs. Capcom.

In an attempt to tone down on the weak points of Jun's character, some of the earlier English adaptations changed her dialogue to make her appear even more intelligent and more sarcastic, as well as expanding her talents on the team (ie: making her a code-breaker and translator in addition to a demolition expert).

As "Princess" in Battle of the Planets, her relationship with Mark (Ken) is also expanded upon, with her leader openly reciprocating her feelings and the two appearing to be more like boyfriend and girlfriend. However, her job of owning the Snack J was changed to her only working part-time, with the "J" explained away as standing for her friend's name (Jill). A notable change in her backstory is that Princess states that she can remember her mother.

Her name in G-Force: Guardians of Space was changed to "Agatha June", paying some homage to her original name, although she was also often called "Aggie" as a nickname. An earlier, failed attempt at the G-Force adaptation had her name given as "Rachel" in the pitch pilot.

Saban's Eagle Riders (adapting from Gatchaman II and Fighter) gave her the name of "Kelly Jennar", providing a surname and another explanation for the "J" at the snack bar. Kelly's characterization was also tweaked, as Princess and Aggie were. Rather than her Bird Style being that of the Swan, hers was stated to be "Dove".

Harmony Gold's initial dub of the OVA series slightly Westernized the spelling of her name to be "June", although she was otherwise left intact.

Jun was voiced by Kazuko Sugiyama in the original franchise, as well as in her cameo in the Time Bokan OVA.

Michiko Neya then voiced Jun in the 1994 OVA remake, which featured a more modern pool of voice actors.

Retrieved from "https://gatchaman.fandom.com/wiki/Jun?oldid=8597"
Community content is available under CC-BY-SA unless otherwise noted.