Sugane Tachibana is a protagonist in the Gatchaman Crowds anime series.

Sugane Tachibana has blonde hair, pale skin, and golden eyes.  He generally wears a button up, white short-sleeved shirt with black suspenders.  He wears full length black pants and black shoes.  He always carries his sword with him.

Sugane is a young boy with an old-fashioned personality and speech who has spent five years on the G Team. Due to his personality, he holds justice and his responsibilities very strongly, and is at first baffled by Hajime, who makes him believe in things he had once not thought possible. When he first met her, he did not even think of her as a woman, but as they continued to work together, he began to understand and admire her.

As a human, Sugane is a skilled swordsman and often carries a katana with him. In his Gatchaman form, Sugane dons a white, swan themed samurai armor with blue glowing outlines and possesses superhuman agility and the ability to cling to walls and ceilings. 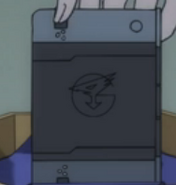 Sugane Tachibana's Gatchaman Form.
Add a photo to this gallery

Retrieved from "https://gatchaman.fandom.com/wiki/Sugane_Tachibana?oldid=7184"
Community content is available under CC-BY-SA unless otherwise noted.