The Yatterman are a crime fighting superhero duo from a 1977 anime of the same name created by Tatsunoko. The series was the second installment of the Time Bokan Series and the most popular of the entries, spawning a remake in 2008 and a live action film.

Gatchaman has crossed over with this series in the form of cameos and non-canon crossovers.

Gan Takada and Ai Kaminari are the proprietors of the Takada Toy Shop, but are secretly the superheroes Yatterman 1 and Yatterman 2. They protect the world's treasures from the evil Doronbo Gang and keep them from obtaining a mystical artifact called the Dokuro Stone, a mystical skull-shaped crystal that is said to contain a map to the world's greatest treasure.

Gan Takada: Gan is a mechanical whiz with a laid back attitude who is the hero known as Yatterman 1. Using the dog robot Yatterwan, a mecha designed by his father and completed by him, he fights the Doronbo Gang alongside Ai. His primary weapon is a kendama called the Kenda Magic, which he uses as a flail or a grappling hook.

Ai Kaminari: Ai is a beautiful young girl skilled in developing electronics who moonlights as the hero Yatterman 2. She is the brains of the team and helped design and build some of the mecha they use. Her primary weapon is a telescopic baton called the Electric Stick, which she uses to zap her opponents with an electrical attack.

The Gatchaman characters, along with many other Tatsunoko characters, make numerous background cameos in the series.

Ken and Jun enjoy some takoyaki in a cameo from Episode 2 of the reboot series.
Add a photo to this gallery

The episode, which took place in Hollywood, featured a scene where Ken is in the background of a movie studio lot, his back facing the camera.

The episode features a brief cameo of Joe, who walks down a street in front of Ai with one of his feather shurikens hanging out of his mouth. The "2" on his shirt was depicted as being drawn backwards, either in error or for the sake of parody. Later, as the narrator talks about the city of Monaco, if the viewers pause the video at a certain moment, they can see the God Phoenix flying over the city

Joe out for a walk, unaware of Doronbo's latest scheme happening across the street.

The God Phoenix flying over Monaco.
Add a photo to this gallery

The most notable appearances of Gatchaman characters was the hour long special dubbed "Episode 12.5". 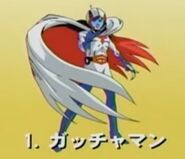 Ken appears as an answer on a TV quiz show. The question being "Which Tatsunoko characters will make a cameo later in the episode?"
(Gatchaman, obviously!)

The Doronbo Trio flee with the stolen ring..only to have the God Phoenix appear in front of them! 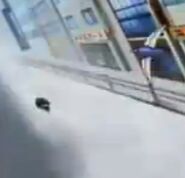 Ken catches the Birdrang with the ring attached as Joe makes his move... 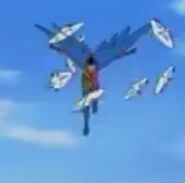 Joe leaps into the air and throws his Feather Shurikens...

and lands a direct hit! Ouch.

Ken:"We are returning the ring to its rightful owner...Farewell!"
The team then vanishes.
Add a photo to this gallery

This episode features the Science Ninja Team, Katse, and X as special playing cards in a still shot as the narrator explains types of card games played by Japanese children in the 1950s. (As the Yattterman had traveled back in time to the '50s to stop the Doronbo Gang's latest scheme.)

When they return to the present, Ai and Gan play cards, the back of which have Tatsunoko characters on them and the "G" belt emblem from Gatchaman.

Episode 22 features a Gatchaman/Sun Vulcan-style Super Sentai parody titled "Ikemen Ninjas". Three men who look similar to Ken, Joe, and Ryu must battle against a Katse-esque villain. After the villain displays the power to grow in size, the three men fuse into a flaming Phoenix to defeat him.

This is an episode in which the writers mock the 2008 US Presidential elections and the media hype surrounding them. Ai asks Gan to go shopping after watching Senator John McCain get into an argument with Senator (and soon future President) Barack Obama on TV. While Gan is walking out of the train station, Ken, Jun and Ryu can be seen in the background. What can be made out from their expressions seems to indicate they are lost, with Ken and Jun having annoyed looks on their faces and Ryu checking a map to find where they are.

In the same episode, the team is later seen in a crowd (sans Jun), inadvertently participating in the Doronbo Gang's US political scheme to dupe people out of their money.

Ryu and Jinpei with Ken on the far right 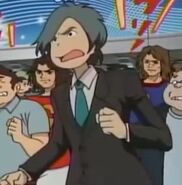 In Episode 25, the Doronbo Gang raise the money they need to build their latest mecha by selling knockoffs of expensive business suits. Among the spectators for the sale is Ryu and both he and Ken can be seen trying out the suits.

Ryu watching the Doronbo Gang's demonstration of their suits.

Ken tries out the latest from the "Doroni" business line of suits.

Ryu in his suit
Add a photo to this gallery
Retrieved from "https://gatchaman.fandom.com/wiki/Yatterman?oldid=6213"
Community content is available under CC-BY-SA unless otherwise noted.